Is there anything more liberating than the sight of a horse running free? Perhaps that’s why so many of us are fascinated by wild horses.

But where did they come? What breeds do they come from? What are the different breeds of horses? And where can they be found in their natural habitats.

We’re going to answer all these questions as we look at 10 wild horses from around the world. So get ready to find out more about these wonderful animals … 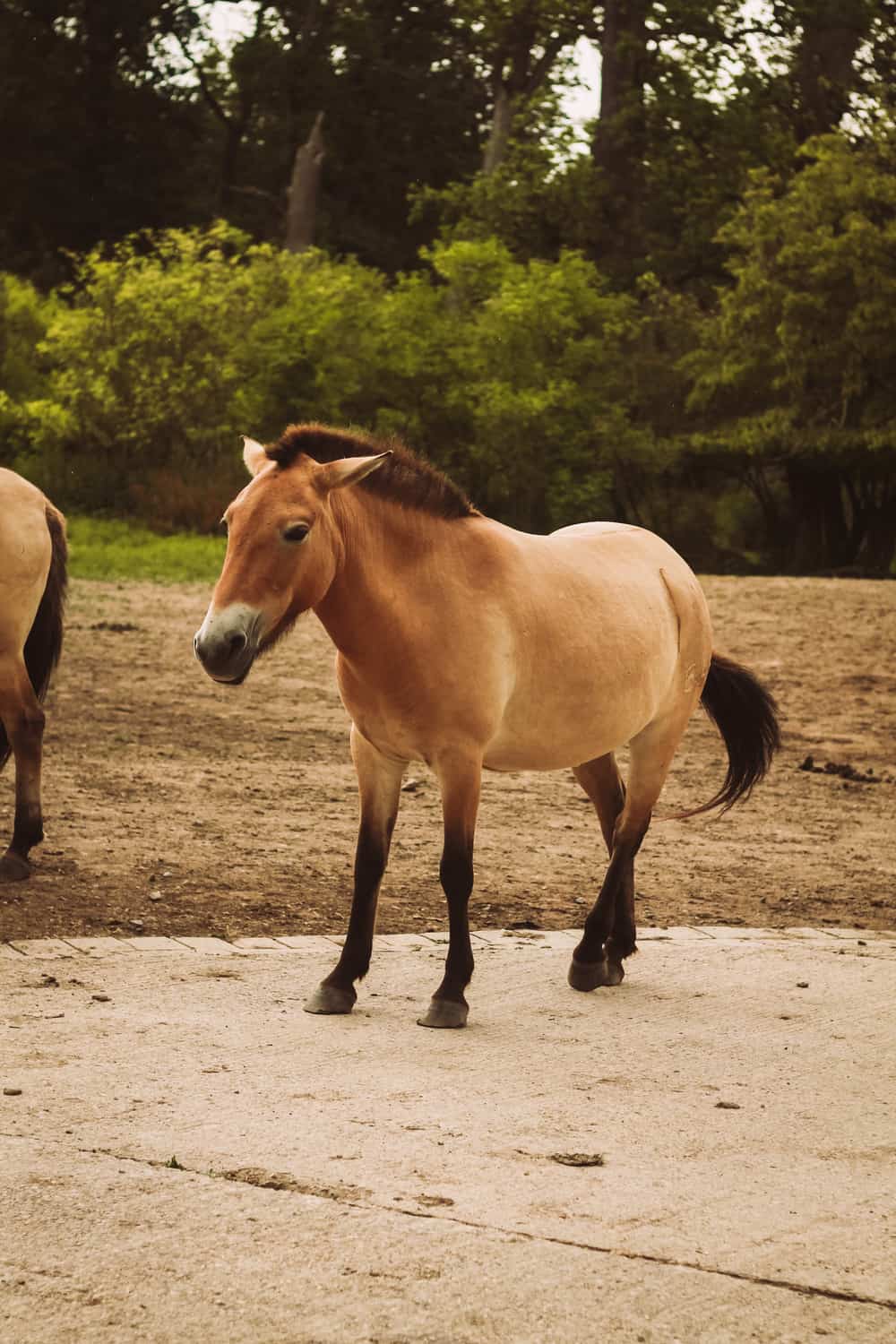 Of all the horses on our list, Przewalski’s is generally accepted as the only truly remaining wild breed. The descendants of domesticated horses are also wild horses.

Also known as the Takhi, Dzungarian or Mongolian Wild Horse, the breed is found in the Gobi desert and central Asia. There is some controversy over whether it may have been briefly domesticated by the ancient Botai people in the region.

Either way, today’s Przewalski’s Horse is believed to have largely the same genetic composition as its ancient ancestors. It is short and averages between 12-14 hands. Its coat is usually dun with a dark brown area around the mane, and paler areas on the flanks, belly and muzzle.

Przewalkski’s eat a variety of plants, and their behavior is similar to that of feral horses. Stallions tend to herd and protect their stallions, while mares lead their families.

Once on the verge of extinction, breeding and reintroduction programs have seen the population begin to recover. These programs continue to this day, giving hope for the future of this fascinating breed. 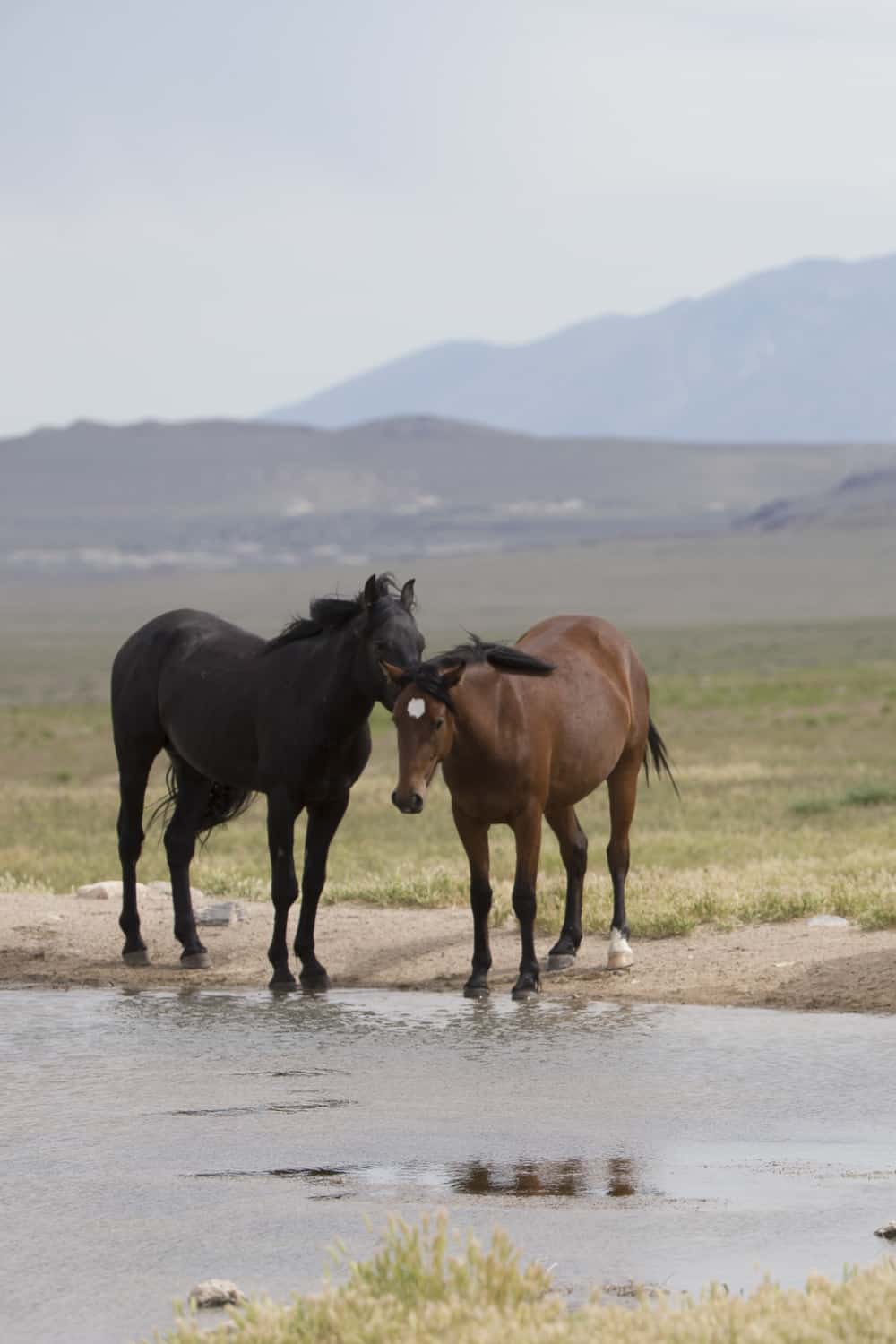 The iconic Mustang is found roaming free across the western states of the USA. Although commonly considered “wild”, it is descended from domesticated horses brought to the country by Spanish conquistadors.

Today’s Mustang has a wide range of different body types, and all colors of coats. Different herds have different genetic makeups. DNA testing revealed that Mustangs have Spanish ancestry.

Today, the Bureau of Land Management works to manage Mustang herds. As of 2017, there were over 70,000 Mustangs on ranges, with over half the free-roaming population living in Nevada.

The Sorraia is thought to descend from the wild horses who once lived on the Iberian Peninsula in Portugal. Their name comes from the Sorraia river in the region. Once threatened with extinction, today conservationists are working to preserve and re-establish the breed.

Sorraias are small horses that are resilient and agile. They can stand between 14.1 to 14.3 hands but can also be as small as 12.3 inches. They have a large head, convex profile and long ears.

Their coats are typically grullo or dun. Their tails and manes are lighter at the edges and darker in the middle. Their muzzles can be darkened and may have white markings. And the way the hair of new-born foals lies can give it the appearance of stripes.

Useful for You: 80 Names That Mean Ghost, Spirit, Soul, or Phantom

You’ll find most Sorraias today still living in their native Portugal. You will also find a smaller number in Germany.

The Konik, also known as the Polish Primitive Horse, lives semi-feral in parts of Poland. Their ancestors were the sturdy horses found in the region of Bilgoraj. Some believe they are the result of breeding between draft horses and wild horses sold by zoos to farmers.

They are tall, strong animals with a straight head, deep chest, and thick mane. They are between 12.3 to 13.3 inches tall and have blue dun coats.

During the First World War, Koniks were used extensively by the Russian and German armies for transporting arms and equipment.

Today, they live on a number of reserves across Poland, and in other countries including the Netherlands, the UK, Latvia, Spain and Belarus. More Koniks are being released into the wild as part of rewilding initiatives across Europe. 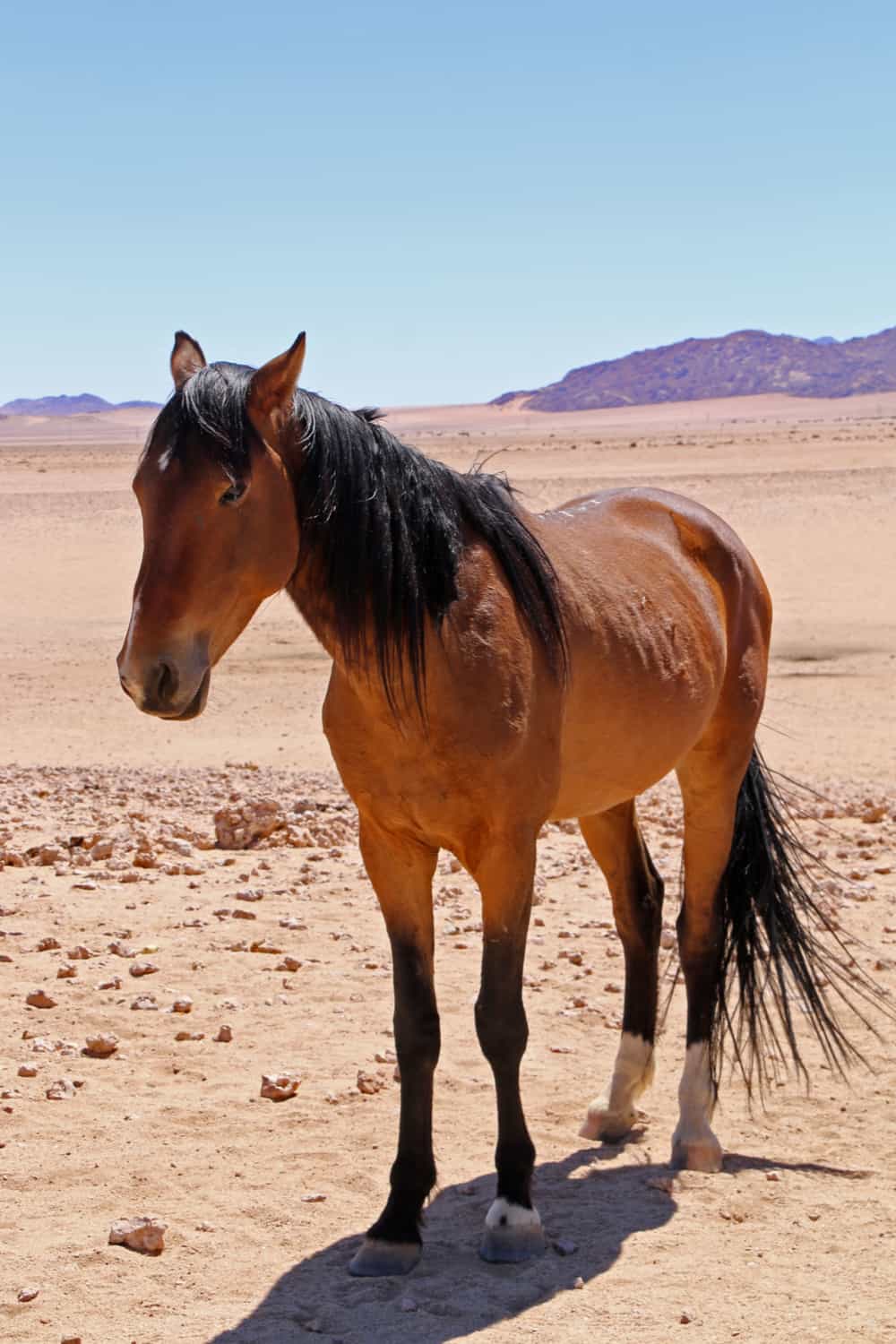 The Namib Desert Horse is the only breed living wild on the whole of the African continent. As you’d guess from the name, it lives in the harsh environment of Namibia’s Namib desert. It is very rare, with only 90 to 150 horses.

It’s an elegant animal, with a similar appearance to the European riding horses from which it’s believed to be descended. But how did such a horse end up in the Namib desert?

It’s thought to be a result of horses being released from camps and farms in the country during the First World War. It is believed that the horses were a result of German breeding programs.

They then congregated in the Garub Plains, where they could find water. Their traditional grazing land is now part of the Namib-Naukluft national park. The twin problems of drought and predation from hyenas, however, means the population is under threat.

Brumbies are Australia’s answer to the Mustang, and are another free-roaming feral horse. They’re best known as inhabitants of the region known as the Australian Alps in the south-east. There are also large populations in Queensland and the Northern Territory.

Like the Mustang, Brumbies are the descendants of domesticated horses escaped from European settlers. They are sometimes rounded up and used for trail horses, stock horses, and shows.

Views on the horses are mixed. To some, they are a pest that threatens the delicate balance of indigenous ecosystems. They are an important part of Australian history, culture, and heritage.

In Brumbies thrive in years without droughts. Today, there are around 400,000 of the horses across Australia. 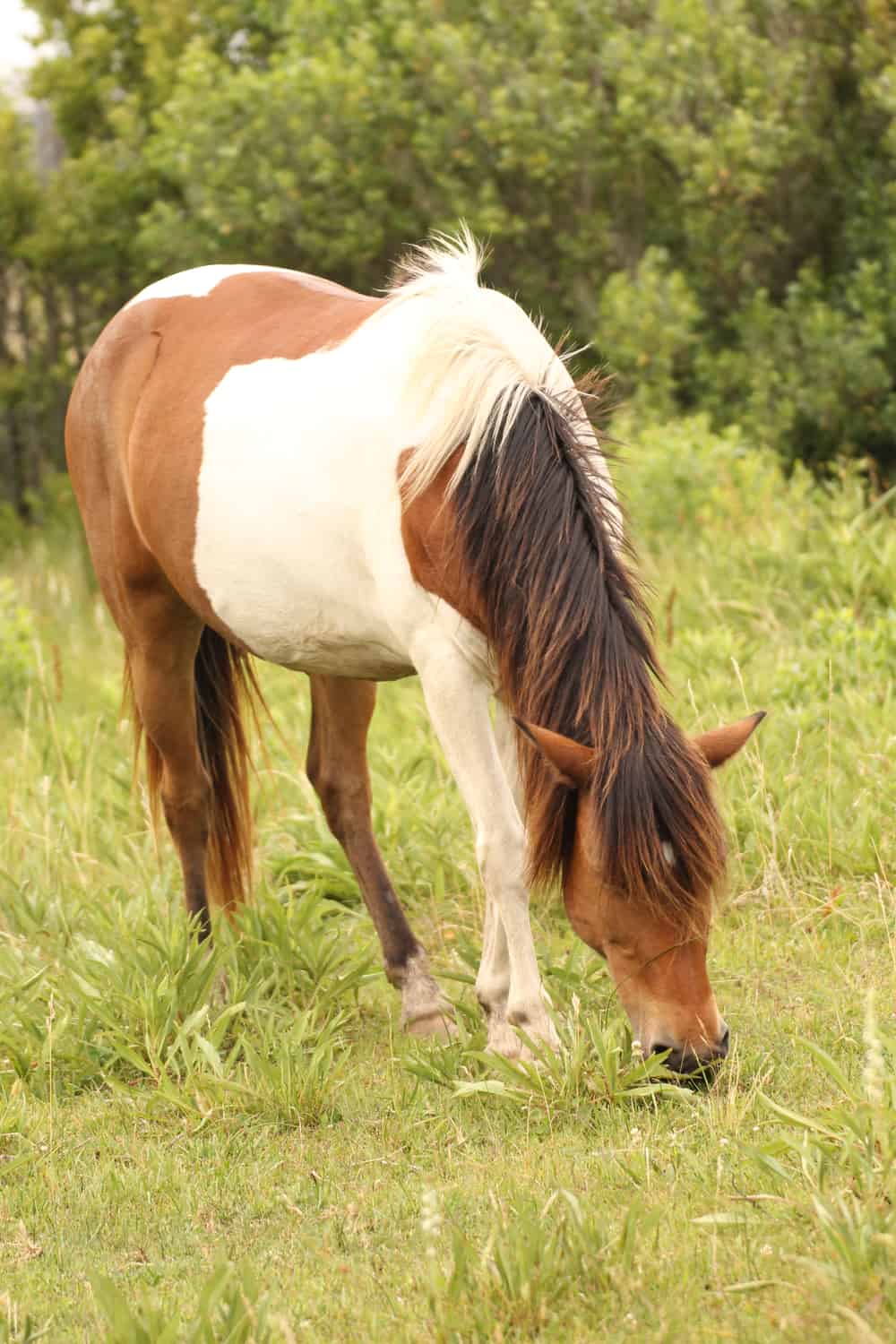 Chincoteague ponies live on the Assateague Islands in the states of Virginia and Maryland. Their location also gives rise to their alternative name, the Assateague pony.

Their origins are lost in the midst of time, but there are several theories. One possibility is that they are descendants from horses salvaged from the Spanish galleon. Others believe that their ancestors were horses released in the 17th century by those looking to escape taxes on livestock.

The ponies are small but sturdy and have an average height between 12 and 13. They have short legs, rounded bellies and shaggy manes.

Their diet of high-salt island grass is what gives them their rounded bellies. This means the ponies have to drink about twice as much water as they would otherwise, producing their rounded tums.

There are approximately 230 ponies living on Assateague. About 80 of these are on the Maryland side of the island, with about 150 across the fence in Virginia. And around 1,000 ponies now live outside the island, having been bought by private breeders. 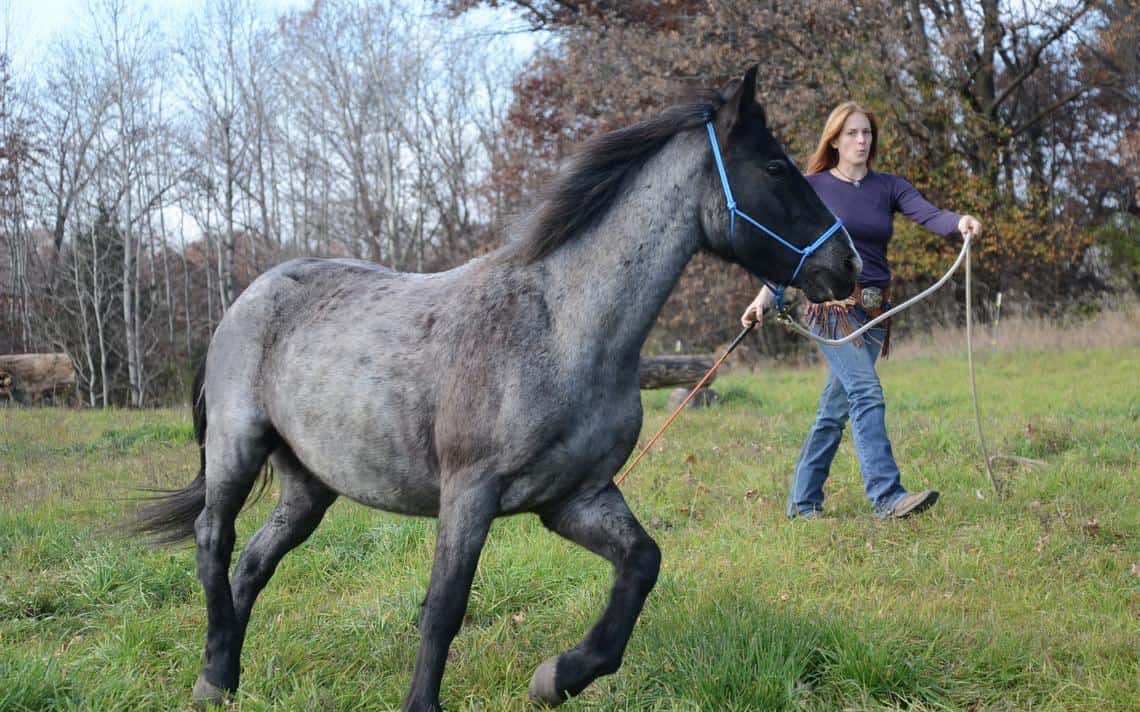 The Nokota horse lives in the dry terrain of North Dakota in the USA. They descend from Native American horses that were bred with Thoroughbreds, Spanish horses and other breeds.

See also  Parts of a Truck Body with Images pdf

Their extinction was almost possible due to a culling program meant to conserve grazing land for livestock. Fortunately, in the 1940s, a few Nokotas were inside the area partitioned for the Theodore Roosevelt National Park. The protected area allowed the breed to survive.

Today, there are two types of Nokota – the smaller “traditional” Nokota, and the “ranch-type”, which more closely resemble Quarter Horses. Park managers maintain herd levels between 70 and 110 horses, with horses above that number being periodically mustered. 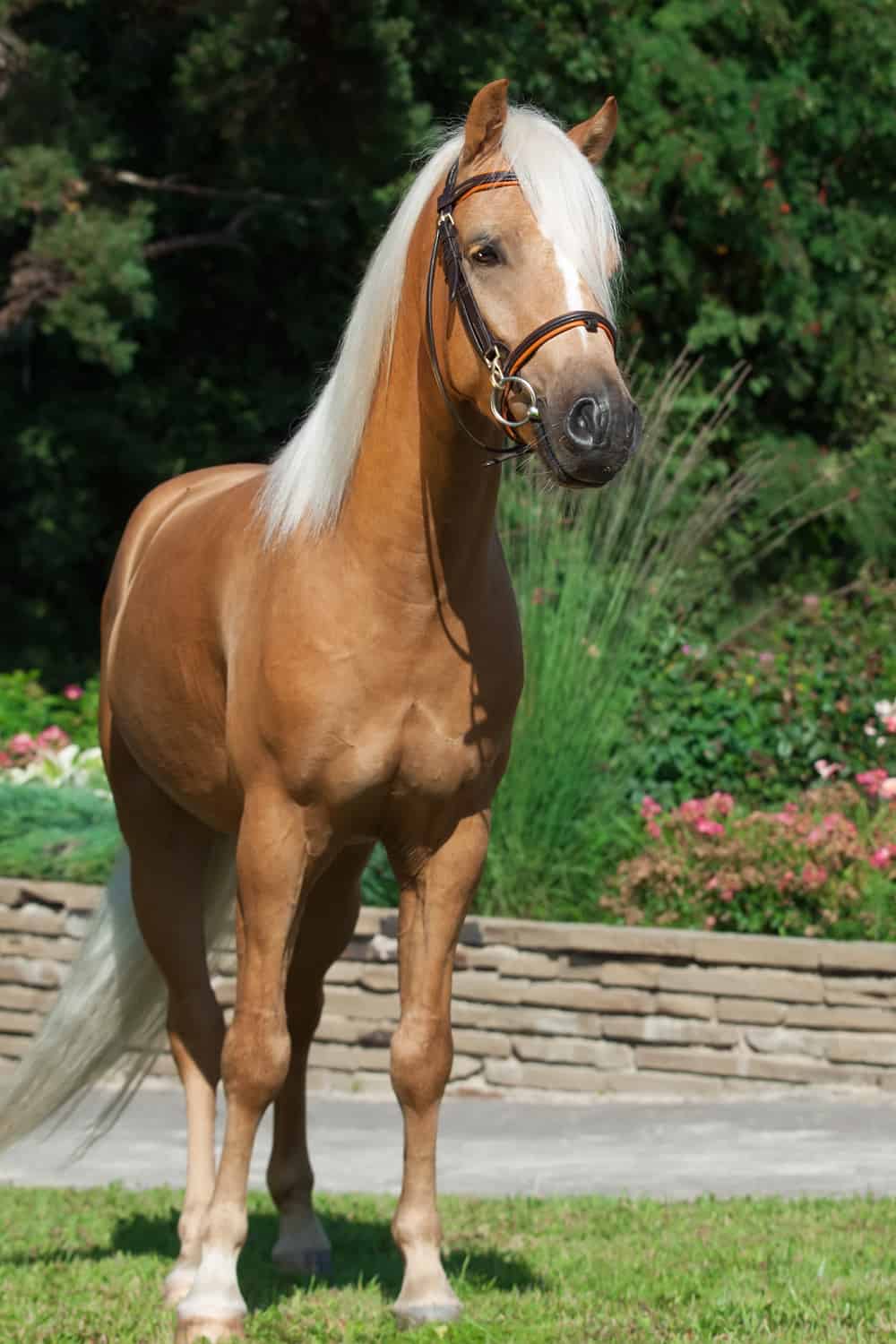 Wales was home to its own native ponies from before the 17th century. The exact origins of the Welsh pony are unclear, but the breed has been influenced by Thoroughbreds, Arabians and Hackney horses.

All Welsh ponies have small heads, large eyes, strong quarters, and sloping shoulders. They can handle anything between 11-16 hands. You can choose from any solid color or a range of patterns for your coat, such as buckskins or palominos.

The county of Devon in England is home to the Dartmoor pony. The breed has been found there for hundreds of years, and has developed to cope with the harsh moorland conditions.

These help to explain the ponies’ diminutive height. They average between 11.1 and 12.2 hands and don’t exceed 13 hands. They have small heads and large eyes. Their bodies are strong and compact.

Dartmoor has around 300 ponies. With its close relative, the Dartmoor Hill Pony, there are a total of around 800 ponies on the moor. They can also be found in other parts of the world, including other parts of Europe, Australia, New Zealand and the USA.

We hope you’ve enjoyed our look at 10 wild horses from around the world. They come in many shapes and sizes. Many breeds are in danger.

Good news is that many breeds are being protected by national parks and rewilding programmes. Contact a park or breed organization to learn more and get involved.

You may be able to play a part in preserving these wonderful horses for the next generation.